I suppose the title of this should by choices choices. Now Riff Raff will need an engine. We don’t want to be drifting about at the mercy of wind and tide too much – do we?

The cunning SNA* in charge  of the team of designers at Swallow Yachts has planned for this eventuality by leaving a well in the back of the boat. This well is open to the waves but- don’t worry – the boat won’t sink because the well is  entirely surrounded by bits of the boat that are above the (normal) waterline. A large plank sits across  the front end of the well – just the place for an outboard engine.  Once clamped in place, the whole engine can be swung down so that the propeller  sits in the waterm making the boat go when the engine is running. Once you have got where the skipper wants to go (or when he (it usually is a he) deems there is enough wind to make sailing possible, the engine can be stopped and swung out of the way, leaving a large whole in which the water can slop about.

This causes drag . Drag is something no one wants, so the hole has to be stopped up with something. The SNA’s solution is a set of flexible flaps, which are pushed out of the way when the outboard is lowered into position and “spring back” into place once it has been lifted.

At least, that’s the theory.

Where was I? Decisions on engines. Clearly, from the above it has to be of the outboard type., otherwise what be the point of the well and the transverse plank (don’t forget the flaps). The SNA recommends I should choose one that produces 6HP and of course it has to be a four stroke.**

There are a whole gaggle of manufacturers, Some seem to make the same engine as other with just a different logo on the front. Vagabond had one carrying a badge labelled “Mercury”. It seemed to work alright, ran most of the time when it was wanted and only sulked once or twice but (fortunately) not in “pretty dicey” situation. ****  So I think I” stick with the brand and I’ll call it Freddie 2.

I suppose I could go electric …..

SNA : Senior Naval architect – Swallow Yachts only has one ONA, so he (it mostly is a he) has to be SNA

** Two stroke engines are light, easy (ish) to start), and mostly reliable but leave messy trails of oil behind them at all times. This is now considered a BAD thing and new ones are no longer available in Europe.*** In comparison  4 stroke engines are heavy and can be bxggxxs to start. But the oil within them is self contained so, apart emissions of CO2  and (no doubt)  oxides  of nitrogen and various particulates ,  are environmentally cool.

*** At the time of writing the UK is sort of semi detached but still part of Europe (I think).

****British code for being in real trouble.

Vagabond made do with the standard two sails. A diminutive jib (the one at the front) and a large main (the one on the back of the mast). This was great in most instances but in light airs and downwind her performance was not that spectacular (it might have had something to do with the helmsman too….)

Riif Raff will be superior and have an extra sail which will be- an alternative to the jib in the right conditions . This third, lightweight, sail is known as an asymmetric (or a poor mans spinnaker). We should now go faster downwind in anything under a force 2 – assuming that I can eventually successfully hoist the thing – for they can be tricky to “fly”.

The flower farmer, now returned from Nova Scotia and living in the Borders* as a Shamanic Practitioner and author  (see her web site at  Plant Spirit Healing  ),  is the artistic one in the family. She has produced four versions of the pattern , shown below. Sadly her drawing programme has developed a flaw (or is it a bug?, or a glitch? or even a branch?) and the top quadrant of each has not been populated with the colours (or so I’m told).

Top left has it for me. Bottom left would be appropriate for a boat called   ‘Dennis the Menace” and bottom right has  “Super Hero” written all over it.

Now it needs a name….

*The Borders – the beautiful land between England and Scotland,  with the River Tweed running through it. Famous for the lawless nature of it’s peoples,  the Border Reivers, until a few of hundred years ago, it has been relatively peaceful since the Act of Union in 1707.  In this era of Scottish Devolution and Brexit will it remain so?

The trouble with buying a boat.

If one chooses a second hand boat (sorry,  pre-owned as one really no idea how many owners have been involved) is precisely that. Were they all out and out racers, wearing everything out a super high speed. Perhaps they fancied their chances as rock or sand bank dodgers who may have been more or less successful – did they revel in surviving force 8’s on a regular basis or  sail sedately from one marina to the next, anticipating the next G & T? Was he/she  (it usually is a he) pride himself on his d.i.y.  capabilities and was his pride justified?

One knows none of this. There might be a sailing log which the owner might share with you – you might find a blog he/she has been silly enough to write. Either may or may not be true. In short you are in the territory that Donald Rumsfelt described as that of unknown unknowns.

Of course, one may have watched the boat with interest for several years and be on nodding (or even drinking) terms with previous owners.

None of this matters. What ever the situation the new owner will inevitably find something about the boat that he (it usually is a he) WILL NOT LIKE.

If, on the other hand, one chooses to buy a new boat, one only has oneself to blame (or the yard, or the weather). One does get the opportunity to have a boat built to ones’ specification. One has to, because the offer of a boat in  “sail away” condition usually means that it does not have any means of propulsion apart from the sails  and usually has no means of securing it on good old terra firma. Pas de l’ancre*, pas de ligne d’amarrage as they say on the other side of La Manche (where you’ll end up without either item).

So one has the delight of  SPECIFYING  what one would like on the vessel, only to find out that the money tree needs shaking some more.

That’s where we are at the moment. Doing the specifying that is, we’ll worry about the money tree tomorrow.

* Reminds me of a Goon Show joke (that shows my age)

They are at sea:

Neddy “Shouldn’t that have been tied on?”

Eccles “Yeah – it was no good anyway – it sank”

The order is placed (gulp) . The deposit has been paid. The colour chosen and the first to do list developed. I hope there are lots of discounts at the upcoming (as they say) LBS….

Terrance, the curmudgeonly trailer which carried Vagabond a few thousand miles (more than Vagabond sailed!),  has been upgraded. It (definitely not a she or a he, despite the name) struggled to carry Vagabond and I found out why – it was only rated for 1500kg and the whole shebang (Trailer and Boat)  weighed in at 1650 kg when I put it on a weighbridge a year or so ago. Since then, it’s had the “old man” electric winch and battery added. 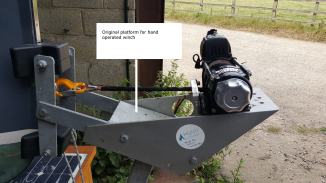 Now I need to think of more names for the various bits of kit:

Outboard :  not a Mercury, so can’t be Freddie: it might be a Tohatsu so could be Tottie – but that’s a bit sexually inappropriate these days.

Enough. I need a cup of tea.